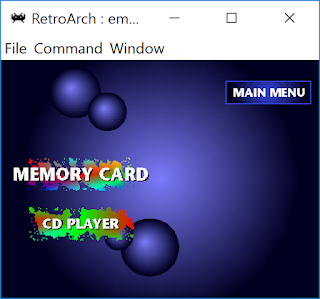 Some nice progress happened over the weekend - I fixed some texture mapping issues in the current software rendering implementation which was causing some undesirable effects, and added support for semi-transparency and dithering. I also started implementing the CD-ROM controller, and after stubbing a couple of other memory accesses (timer and joypad-related), the BIOS menu seen above showed up correctly.

I quickly tested faking some more CD-ROM commands and make the BIOS believe that a licensed game was inserted - this should normally lead to the well-known PlayStation logo. The screen does show up, but without the 3D rendered logo due to the lack of GTE support at this moment. Hopefully, that should be my next update!
Posted by Unknown at 7:11 PM