Our game has been released on Switch, PS4, and XBOX One, with the PC version to follow shortly. So far, reception has been amazing! So, what's next?

During my time working on Wonder Boy: The Dragon's Trap, I came to the following realization: first of all, ImGui is awesome. Second, it would be nice to be able to work with something a bit more "industry-standard". This is why I'm releasing today an ImGui port to Unreal Engine, or more technically an "implementation example".

This version has some limitations highlighted in the code base documentation, but it could prove to be useful for some. I don't plan to continue improving on this solution at this moment, as overall, it looks like Unreal Engine does not offer the level of control I would like to see in a game engine. I will try this exercise on Unity soon (to which I am unfamiliar with as well), and time will tell whether my expectations are just too high or not!

Here's the link to the code base:
https://github.com/sronsse/UnrealEngine_ImGui

Beware: cool screenshot of ImGui running in Unreal Engine below. 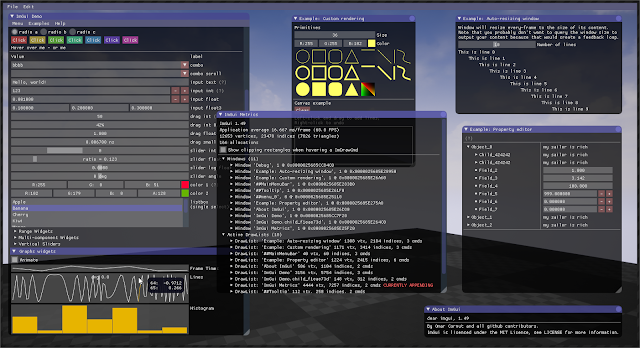 Edit 7/1/2017: interestingly enough, even though Unity is C#-based, it does provide a bit more "low-level" access to developers. I do have a proof of concept up and running but it would definitely need some clean up before I can release it! I am currently busy working on a new custom engine, more info on this soon!
Posted by Unknown at 3:26 PM